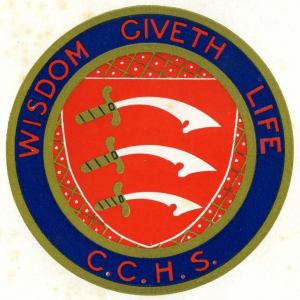 … for Ethel Munson’s 90th birthday. The event was recorded in an article in the CCHS Alumnae newsletter, reprinted below.

Regular contributor, Joan Gurney (Appleton 1938-51) writes. “It is a great privilege for me to reunite Ethel Munson (Carter 1937-42) with the Old Girls’ Association. Ethel, who celebrated her 90th birthday in July 2016 not only was a pupil at Grey Friars but returned to work there in 1972 when it was the Adult Education Centre (later re-designated Adult Community College) and stayed for nearly 20 years. It was therefore appropriate that a group of us who had also worked at the college at the same time as Ethel should celebrate by taking her out to a birthday tea at the new Grey Friars hotel. 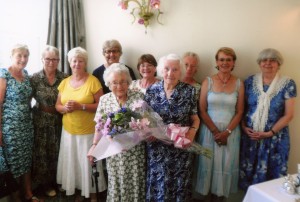 Two more of the group, Delia Bloom (Woodward) and Yvonne Carter (French) were also CCHS pupils in that era. We all hoped to reminisce with Ethel and weave together memories of Grey Friars as a school and as a college and enjoy it for an afternoon in its new life. The occasion produced much talking, informal speeches and presentations of the gifts, cards and flowers.

The hotel staff were delighted to entertain somebody who had had such a long association with Grey Friars and provided us with a sumptuous tea, beautifully laid out and presented. Although my years in the Preparatory and Junior Departments of CCHS at Grey Friars overlapped those of Ethel, she was a bit ahead of me and I cannot remember her very well. Our first real meeting happened in the early 1970s when we both started work at the Grey Friars College. Ethel joined my class of swimming for adult beginners which was held at the former Garrison Pool, hoping that I would teach her to swim.

I remember Ethel as a strong minded, self assured and determined lady who always spoke her mind in the nicest possible way. And she has not changed a bit!

As Ethel arrived for this afternoon of nostalgia, she walked past the imposing front door and remembered that 80 years ago it had an attached brass plate which read “Headmistress Miss R H King MA Cantab”. The pupils, of course, were not allowed to enter the front door but had to walk to the passage way between Grey Friars and All Saints House. Here Ethel will have remembered the bicycle sheds – the bicycle became Ethel’s friend for life! She rode one until very recently and then gave it away to charity for overseas use.

Then Ethel entered the hotel’s Reception area with its gleaming white marble floor which has replaced the wooden oak floorboards of former years. This was the college’s canteen run by Elsie, and later Ursula, and here Ethel may have eaten her lunchtime sandwich in the 1970s and 1980s but imagined that she was back in the school dining room of the 1930s and 1940s sitting on an uncomfortable wooden bench and eating in silence with only brief periods of talking signalled by the ringing of a small bell. Stew and blancmange no doubt spring to mind! 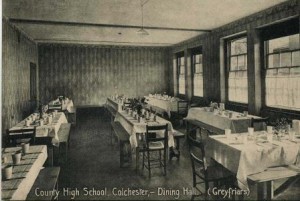 The base of the main staircase was the next prop to Ethel’s recollections as she passed the decorative ivory and ebony terminal of the shiny banister, now beautifully restored.

The next stop for Ethel was the hotel’s Rose Tea Rooms on the west side of the front door with their striking and colourful Italian glass chandeliers. The last time Ethel was here it was part of the Administrative Office of the Grey Friars College where she had a desk – affectionately known as “Ethel’s Patch”. And stretching back beyond that time it had been a CCHS cloakroom with hooks for shoebags, blazers and panama hats.

Once we were seated at a long table waitresses appeared from a door which had led into the college’s caretaker’s office. But Ethel looked back to her school days and remembered that the same door led into the school’s science laboratory, passing the fume cupboard on the way.

As we ate our delicious tea we exchanged memories with Ethel of how disciplined we were at CCHS. We were taught politeness, good manners, respect for our elders, and of course in wartime, co-operation and support for each other as we ran for the air raid shelters or dived under our desks for safety. Bullying was unknown. Needlework and gardening were part of the curriculum and we each had our own little plot to cultivate and plant. Ethel has always loved gardening and maybe she rubbed shoulders with Beth Chatto who was also at school in Grey Friars in the 1930s. We reminded Ethel that one of our first tasks in needlework was to make a pair of knickers for ourselves in the school summer dress material of red, white and blue check. Some fitted but many did not! And what became of that iconic schoolgirl undergarment – the liberty bodice?

Ethel remembered the emphasis on Health and Safety in the days of Grey Friars College and compared and contrasted that with school days when risks were all part of growing up. We played conkers in autumn without black eyes or teeth knocked out, and made icy slides in the winter with only a few chipped knees and grazed hands. In our art and nature study lessons we learned to respect the hazards in the garden. We ate the delicious fallen walnuts but avoided the toxic yew trees and their berries. We watched the newts in the pond, but rarely fell in. 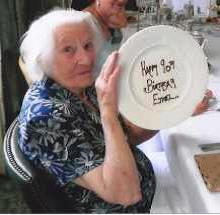 All good things have to come to an end and as Ethel blew out the candle on her little cake and held up the plate with “Happy Birthday” written on it in chocolate sauce, we urged her on her way out to take a last look at the spectacular hall with its stained glass windows, the classroom with the big bay window overlooking the garden (which was every pupil’s favourite room) and the adjoining Headmistress’ study with features of a private house library.

We said our goodbyes and hoped that we had captured for Ethel some nostalgic memories of two episodes from her past played out against the background of a much loved neo-classical building, now tastefully brought back to life for many still to enjoy.”