It’s never too late to learn!

As part of the annual Festival of Learning, the charity CALA (Colchester Adult Learning Assistance) invites nominations for awards to learners whose stories can inspire others. A spokesman said, “Although we are choosing only three of countless dedicated adults, it is hoped that their success will provide encouragement to others. It really is never too late to learn, whatever your age or situation.”

Mark, in a Tai Chi class, demonstrated strong determination to take a full part despite serious health issues. His tutor nominated him as a result of his classmates’ high respect and his motivational presence.

Benjamin has been a significant participant in his maths class, working hard and willing to help both tutor and classmates.

Claire has progressed through various levels of dressmaking courses and produced some beautiful items. Willing to try new techniques, she is about to move on to fashion and pattern cutting.

The awards are named in honour of Frank Brown (1924-2014), a Trustee of the charity since inception, and before that a whole-hearted supporter of the Members’ Association and the Guild in the former Grey Friars adult college. Frank’s enthusiasm for learning throughout life is commemorated in this scheme.

The Festival of Learning (previously Adult Learners’ Week) is a national celebration of lifelong learning, with ‘Have a Go’ learning and other events taking place during May and June. To see more visit www.festivaloflearning.org.uk or enquire at your local library. 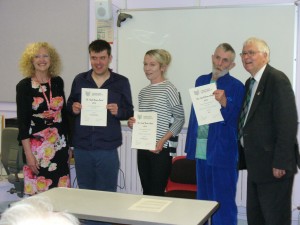