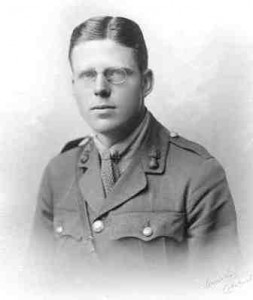 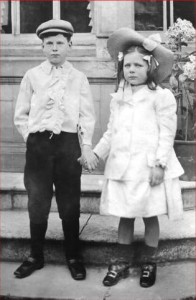 (photo left, with sister Adria on the garden terrace at Grey Friars – the last children to be born there as a family home.)

Second Lieutenant 6th Bn., Royal Welsh Fusiliers, attached to the 1st/5th Bn., Essex Regiment – Edward was killed in action by a sniper on the first morning of General Allenby’s successful campaign, known as the battle of Megiddo, which, with Lawrence and the Arab forces attacking from the east, drove the Turks out of Palestine.

Edward and his platoon were attacking a Turkish position at Kefr-Kasim near Rosh Ha’Ayin in the district of Jiljulie about 15 Km north east of Tel Aviv. He was first buried in Jiljulie District Military Graves where the Wadi Rabah opens to the plain of Sharon, but later exhumed and reburied

He is now buried at Ramleh War Cemetery, Israel which dates from when Ramleh was occupied by the 1st Australian Light Horse Brigade in November 1917. The cemetery covers an area of 23,895 square metres and the Commonwealth section is enclosed by a stone wall

Photos, letters, war memorabilia, (including the compass being used by Edward when he was shot), are in the possession of E L Fenn whose grandfather was the last owner of Grey Friars as a family home. More details on his family website www.thekingscandlesticks.com to which we are much indebted for a wealth of material for this project.