It has been suggested to us that we should ensure there is an opportunity for people to celebrate the presence of adult education at Grey Friars. The argument put forward is that apart from the Franciscans (the Grey Friars) themselves (300 years), adult learners have had the longest tenure (40 years) on the site. So here goes … …

2015 sees a double anniversary – comprising the good and the not-so-good!

“Students participate fully in the classes and learn with enthusiasm; they support each other and benefit from well organised and carefully planned sessions.

The quality of learning was satisfactory in 21% of classes, good in 66% and very good in 13%. 97% teaching is satisfactory or better; 76% was good or very good.

Staff support students in a positive manner and encourage them to extend themselves.

Students are confident, serious learners and make good progress. In some areas of the curriculum, such as art and craft, students achieve high standards and produce excellent work. The college has a committed and loyal student body.” 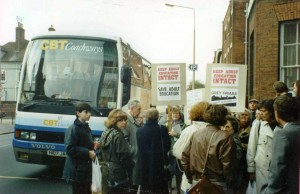 GF students off to Westminster in the 1990s

The “Grey Friars” name had been mentioned in national news when yet another press release from the Associated Examining Board declared the college … “TOP OF THE LEAGUE for top-performingA-Level students for the fourth time since the awards began in 1986”.

The list of high achievers who studied (part-time it should be remembered) at Grey Friars is impressive. Subjects in which they excelled included French, Business Studies, English Literature, Economic & Social History, Sociology and Fashion Design and covered a range of examining boards. In sport, Grey Friars also excelled in swimming. Even without a pool of its own, it became a nationally recognised centre for swimming teaching and the training of teachers, and also won awards for the very high number of adults who learnt to swim, including those with varying disabilities. 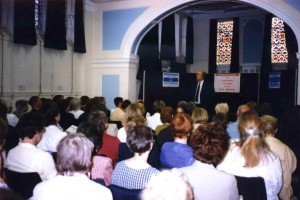 NOW THE NOT-SO-GOOD ANNIVERSARY:  On not such a positive note, 10 years ago Essex County Council rescinded Grey Friars’ status as a college, removed its local Colchester-based managers and governors and relegated it to a venue for a County-wide managed service. (Two years after that, the High Street site was put up for sale and the much-reduced programme was moved to Barrack Street. Thankfully there are still courses to attend locally, at what was at one time an annex of the main college, the Wilson Marriage Centre (ironically itself saved some years before by being merged with Grey Friars) – see www.essex.gov.uk/adult-learning )

But is it simply a coincidence that it has just been announced by Sport England that, despite the ‘legacy’ of the 2012 Olympics, participation in physical activity, especially swimming, has declined?

And NIACE (the national body for adult education) has consistently warned of the negative effects of a massive fall in participation in educational activities by the over-60s.

Similarly, OFQUAL has announced a significant decline in the take-up of foreign language A-levels … … at the same time as a BBC poll highlights our nation’s ‘nervousness’ about coping with languages on holiday?

Rather than cutting back on adult education as an unaffordable expenditure, shouldn’t its funding be seen as both a compensation and an investment – a double advantage? Surely, especially in times such as these, every town needs its own professionally-managed adult college with a comprehensive curriculum tailored to local needs?

In a remarkable twist of fate, however, despite no longer being a place of learning, Grey Friars still encourages and enthuses local people in the quest for knowledge and understanding.

There was an overwhelming response during the 2007 Heritage Open Weekend exhibition and tours organised to mark the closure of the adult college after 40 years at Grey Friars.

Our book about the 2000-year history of the site followed; interest in the preparation of the book resulted in invitations to lecture on its findings; lectures prompted responses from the community – and turned the whole enterprise into an on-going community education project.

Contributions began coming in from across the world via this website (see the resources section in the top menu). It continues the research into the site’s historical, social, archaeological and architectural significance (in effect, constantly updating the book) by encouraging participation from all with Grey Friars connections or interest. To see about the book, and our other publications, click on the ‘About Us’ button in the top menu.

Please spread the word amongst friends and family. We can also be contacted via Facebook on www.facebook.com/greyfriarscolchester so please visit the page and encourage your contacts to “like” it.

We’ll do our best to keep publishing information and memorabilia from our archives, and, where possible, will present photographs and documents for sharing. When we have enough we will load them into the resources section of this website. Everyone can help by staying in touch, offering material and memories, and celebrating what’s best about lifelong learning.