This photo was discovered during alterations to Grey Friars in the 1990s.

UPDATE: Local historian Andrew Phillips has suggested that the group is Frank Cant, the rose grower, and his staff. This would explain the wide range of ages of the men, the presence of two women from the WW1 Land Army and the flowers in the men’s buttonholes. Frank was the nephew of Benjamin Cant, also a rose grower, of Mile End. Frank’s business (now Wyvale) was based at Stanway until 1967 when the two rival firms merged. For reprint of Gazette article with more information see foot of page. 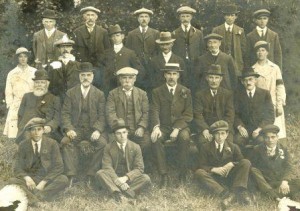 For bigger version click> LARGE PHOTO  A partition wall was being removed to open up a ground-floor room at the rear of the house, returning it to its original dimensions. Wedged in a gap, what at first seemed to be a cheap print of a ‘view’ turned out to be a picture cut from a magazine, pasted over a carefully-mounted photograph.

The board backing the photograph was badly damaged, but just about readable in the corner was an embossed name: Oscar Way, Royal Studio, Colchester.

The photograph shows 20 men and 2 women, formally posed in an outdoor setting. The men appear to range from teenage to elderly. It may be recording something like a works outing. The two women appear to be wearing some kind of uniform (see enlarged images below).

If the photo pre-dates the conversion of Grey Friars into a school (hence the sub-division of the room) it must have been taken before 1904 if after the sale by the Fenns it could be First World War period..

Some questions are therefore posed:

• Can the photo be dated using the clothing as a guide?

• What could be the role of the women, and what is their uniform?

• Can the origin of the group be traced?

• What may be their connection with Grey Friars?

Some information which may be of help concerns the last family to live at Grey Friars, 1891-1903. The owner was Dr Edward Liveing Fenn, a physician connected with the hospital in Lexden Road. He was a magistrate and active in various ways in social, religious and philanthropic circles. One of his sons (not identified in the picture) became an engineer following an apprenticeship at Paxman’s. Dr Fenn also had connections in Nayland, inheriting property and moving there after Grey Friars.

We would be most grateful for any help in interpreting the photograph.

THE mystery of the photograph found in the walls of the former Grey Friars adult college has been solved.

A Colchester historian spotted the article and thanks to a couple of clues soon worked out where the picture was taken.

Alan Skinner, former principal of the college who discovered the photograph, thought it might have been a works outing but was not sure who the two women might be.

Local historian Andrew Phillips, who has a book coming out – “Colchester in the Great War – later this year, says the two women are members of the Women’s Land Army formed in the First World War.

Having already started to think the roses the men are all wearing in their buttonholes might be a clue, Andrew says he then recognised the man in the middle wearing a straw boater hat as Frank Cant, the nephew of famous Colchester rose grower Ben Cant.

“In the Victorian age, when roses were the most popular flower in England, Ben Cant was the best known rose grower in Britain, constantly winning national prizes and selling his roses all over the world.”

He taught his large family the trade on condition they worked for the family firm but Frank went against this, promptly setting up in competition.

During the First World War they both continued to grow roses and enter competitions but with food shortages becoming a problem the Government began to control its production.

“Both Cant firms began to grow potatoes, but with half the adult men in the area already in uniform, there was a shortage of manpower too. One answer was the Women’s Land Army,” he says.

Andrew says the photograph dates from 1918 or 1919 as before then there were few land army women trained in the area.

“However, the buttonholes show that Frank Cant is back growing roses, so it is possible that this is 1919 – before the Women’s Land Army was disbanded, and after Frank got back to roses.”

Reader Julia Cottee had also recognised her grandfather Thomas Nice on the right side of the picture wearing a flat cap.